End-to-End Verifiable Voting (E2EVV) is a group of new technologies that strengthen election integrity and provable trustworthiness of precinct results. Using election verification technology, a voter can verify that their ballot was correctly recorded and included in the count. Plus, anyone can double-check the process of tallying the votes that were cast. Election officials and citizens alike can benefit from this technology.

Microsoft’s ElectionGuard is a developing technology for end-to-end verifiable elections. When integrated into a voting system, ElectionGuard adds another form of transparency to the election process, allowing voters to verify that their votes were correctly recorded and included in the results, and allowing anyone to verify that the recorded votes were correctly tallied.

Hart InterCivic integrated the open-source ElectionGuard software development kit into their Verity® scanner for this election. Hart is the first major voting system manufacturer in the United States to support independent verifiability.

Enhanced Voting creates voting solutions that are secure, easy-to-use, and accessible to all. They host the public website where voters can check that their vote was included in the election tally.

MITRE built the independent verifier that was used in the November 2022 pilot in Franklin County, Idaho, to check election results. The MITRE Verifier is a computer program that checks the integrity of an election record that is published in an ElectionGuard election. The check of the results was successful, indicating that the tallying of ballots in the pilot election was accurate.

The integrity of U.S. elections is fundamental to our nation’s identity. Every component of the election system must be secure— from voter registration rolls, to safe ways to vote, and ultimately, reporting an accurate and trusted count.

For more than 60 years, MITRE has helped government organizations and Critical Infrastructure mitigate risk through objective insight and innovation, free from commercial interest. Using our cutting-edge research and technology capabilities, we tackle the biggest challenges to solve problems for a safer world.

Through our National Election Security Lab and development and application of the MITRE Verifier, we’re committing our resources to help the election community.

Learn more about the MITRE Verifier through the FAQs below, or try out the Verifier yourself.

Verify the counting of the votes with the MITRE Verifier

ElectionGuard is a new election technology for End-to-End Verifiable (E2EV) elections. In an E2EV election, voters can see that their ballot was correctly recorded and included in the count, and anyone can double-check the process of tallying the votes that were cast.

2. What is the MITRE Verifier?

The MITRE Verifier is a computer program that checks the integrity of an “election record” that is published in an ElectionGuard election. This involves checking many specific mathematical, cryptographic properties. The MITRE Verifier is intended to promote voter confidence by providing a method of independently verifying the accuracy of ElectionGuard election results.

3. Why did MITRE build the Verifier?

MITRE supports the use of End-to-End Verifiable (E2EV) election technology such as the ElectionGuard system. E2EV elections make the process of counting votes more transparent to the general public, rather than the public having to rely only on those who are able to physically observe the process.

4. Why is MITRE an appropriate organization to provide a Verifier?

Verifying election results is a matter of critical national importance. Because it is so important, parties who offer a Verifier should fulfill several key requirements: they are non-partisan, technically sophisticated, work solely in the public interest, and operate without pursuit of profit. In addition, they should transparently provide the code that operates the verification function, so that there are no secrets related to how the results are produced. MITRE, as a nonprofit chartered by Congress to work solely in the public interest, has for sixty years met these criteria and makes the code freely available. MITRE’s role in building the Verifier is that of an independent third party that stands apart from the voting equipment, separately calculating whether the outputs on the voting equipment are accurate totals. The Verifier is a classic example of MITRE operating in accordance with our charter to solve problems for a safer world and to serve the public interest as an independent adviser.

5. How will the MITRE Verifier be used?

6. Why should I trust the MITRE Verifier?

We at MITRE believe we have done a good job writing our Verifier, but we are not asking that anyone take our word for it. The MITRE Verifier is written in the Julia programming language and is entirely open-source, allowing for public examination of our software. We made efforts while writing our Verifier to make the processing steps clear to facilitate inspection by an appropriately skilled reviewer. The MITRE Verifier is one of many verifiers that exist; however, it is the only one written for the latest ElectionGuard technology and piloted in a real election.

7. How can I use the MITRE Verifier?

If you want to run the MITRE Verifier on your own computer, visit MITRE’s ElectionGuard Verifier GitHub for more information.

The MITRE Verifier and its software are open to everyone. The source code can be found at MITRE’s ElectionGuard Verifier GitHub.

9. What does the MITRE Verifier check?

The MITRE Verifier performs all of the checks described in version 1.1 of the ElectionGuard official specification that the pilot version of the ElectionGuard software would support. Among other things, our Verifier performs checks on each individual ballot, confirming that the ballot selections are in accordance with instructions for the particular election being conducted (e.g., each option can only be selected once per ballot, or that a particular contest allows voters to select only one option).

Cast ballots are “aggregated” or combined during the count of an ElectionGuard election, producing an “encrypted” or encoded version of the tally for each option in each election contest. Our Verifier re-computes the tally and confirms that the election record contains the same result.

10. What were the results of running the MITRE Verifier during the Pilot?

Here is a screenshot of the results of the verifier.  Note that the final line, “true” indicates that no errors were found by the verifier.  If you want to double-check these results yourself, it is available at MITRE’s ElectionGuard Verifier Github.  The SHA256 checksum is shown to identify the specific election record we verified. 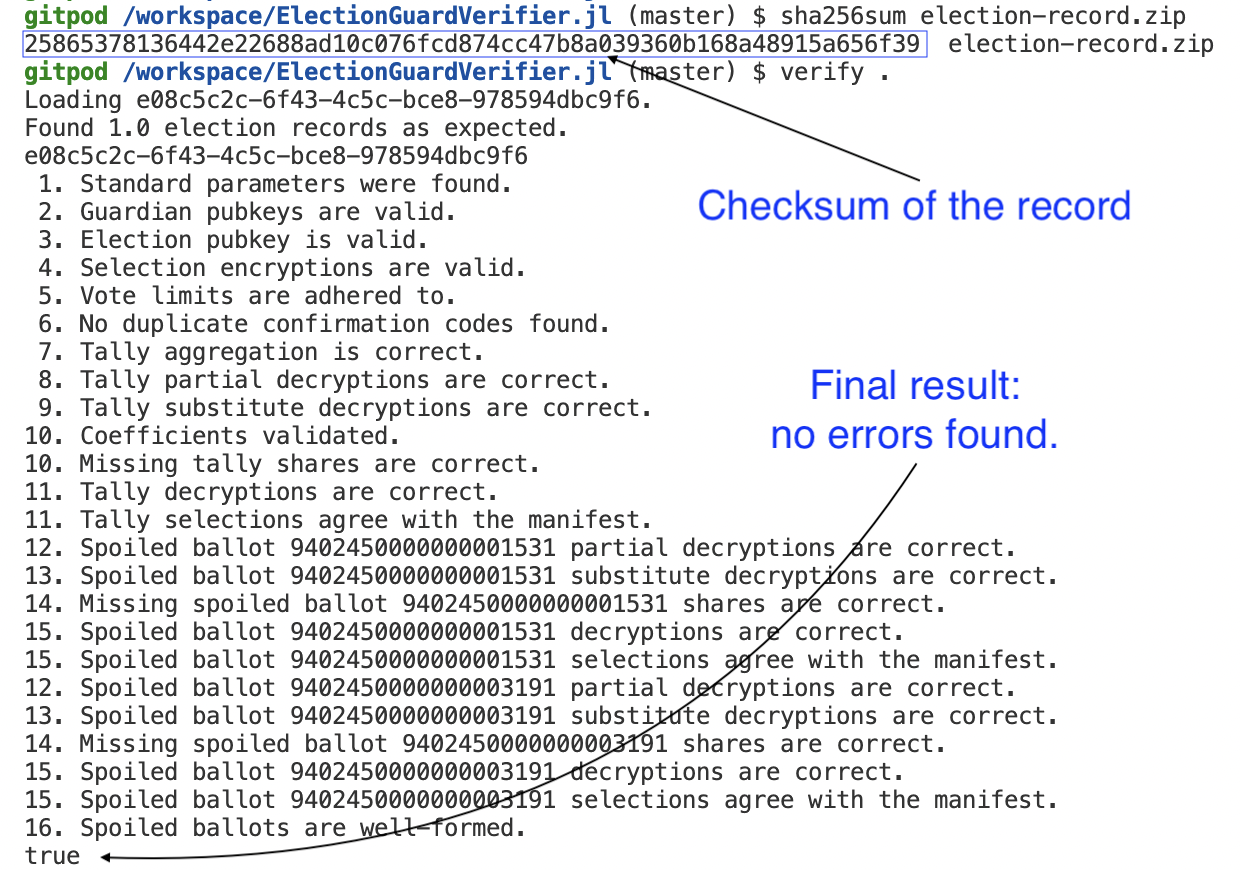 11. How can I get End-to-End Verifiable (E2EV) elections where I vote?

ElectionGuard is still very new. The recent ElectionGuard pilot is an exciting moment for the technology, but more widespread use requires more support from election equipment vendors, as well as the development of evaluation methods for End-to-End Verifiable (E2EV) election technologies. Any election officials interested in learning more about E2EV elections or the MITRE Verifier can contact MITRE via the contact us form on our National Election Security Lab’s website.

12. Where can I read more about MITRE’s work with election security?

Secure and Transparent Elections: Looking Towards the Future | MITRE